Introducing the NO SEW StraightCurves Poppy!

As you probably know already we are supporting the Chesterfield poppy cascade and as I’m not keen on sewing woolly things together the existing free patterns for the project were a barrier to me helping, so I decided to develop my own. Read on for the chatty bit or scroll down to the bottom of this blog for the pattern.

Here it is! The results of my NO SEW StraightCurves Poppy Patterns.

I started off following the existing patterns using a magic ring with black yarn to make a flat circle, but then simply could not face the thought of sewing many poppy parts together. I then remembered a pattern I used years ago that made a bobble in the flower centre by reducing the stitches on the next round, and off I went. I reduced the ten initial stitches to five which then saved me having to count petals later. I have done two versions of the pattern as shown above one using trebles and one using double trebles. Both versions have their plus and minus points, the treble version shown on the left is faster and smaller, but I think although it takes a little longer that the centre one looks better. The poppy on the right is the treble pattern with extra wool added by hand sewing at the end to represent the stamens in the centre of the poppy. 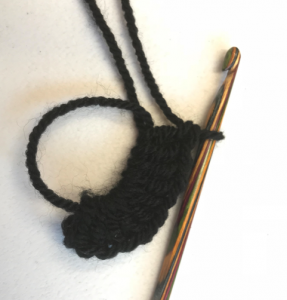 The image to the left shows round one before you tighten your magic ring and complete the round with a slip stitch. 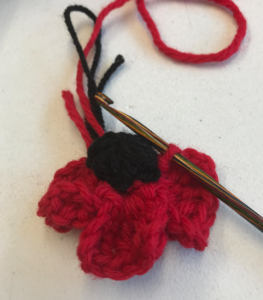 The image to the right part completed poppy three petals in when working right handed. As this pattern is symmetrical you do not need to make any changes in order to make a left handed poppy – YAY! 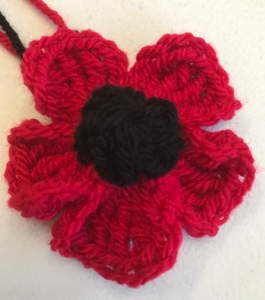 Round One. Using black yarn make a magic ring ch3, 9 tr, tighten magic ring, ss to join and fasten off yarn.
Round Two. Swap to red and join into the top of a treble stitch from round one. Ch1 and dc same stitch then *miss a st, then dc in next st* repeat ** to end (5 dc total)  ss into top of first dc to join (do not fasten off yarn).

The poppy shown in the picture uses Stylecraft Special DK in black and lipstick.

If you have any issues with this pattern please let us know and we will endeavour to help out where we can and you can always come along to crochet clinic if you want help in person. If you don’t know how to crochet and would like to learn we have a beginners crochet course starting in a couple of weeks that will provide you with the skills needed to complete this pattern.

Hope you enjoy the pattern.