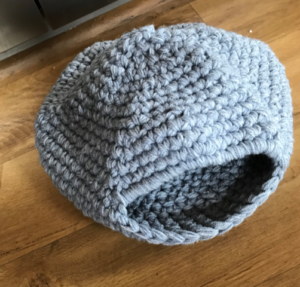 Having recently moved house I am more than aware of the current size of my yarn stash and decided to get rid of some of it by making something chunky and with kittens planned I thought a cat bed was a great idea. Due to not liking following patterns I just freestyled it, however after posting a picture on facebook I got asked where the pattern was from so I decided to make another and write it down as I went. 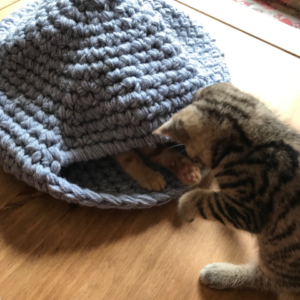 I have now typed it off and I am offering it FREE with any purchase either online or in person for the next month or two. Just let us know you need a copy either in the studio or by email if you have made an online purchase and we can email it over to you.

A word of warning if you are a loose crocheter you made need to use a smaller hook as the first one I made went a little floppy. I used 6 strands of Aran weight yarn and a 12mm hook for both but focused on tight thoughts for the second one which came out a little smaller and much more erect. An idea I have also had is that it may work well with a wool content yarn and then felted in a washing machine, it would need to be made a little larger though if you have a big cat. 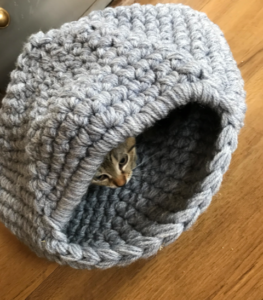 The second one I made I also lined up all the increases and decreases – this makes for a little more structure but also a less round finish and a little more teepee. If you wanted to randomise these a little in your version like I did on the first one you just need to move some of the stitches on the round – but don’t do it on every round!

Hope you enjoy making it as much as I did and that your kitties have fun too! 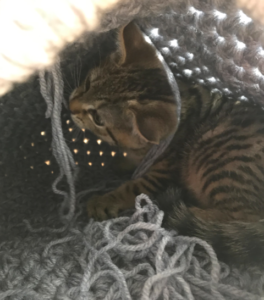 Ps. don’t make the mistake of not finishing off your ends until you let your kitty have a go as Rosie and Fred had a little too much fun playing with them for my liking.

Emergency First Aid Work is back